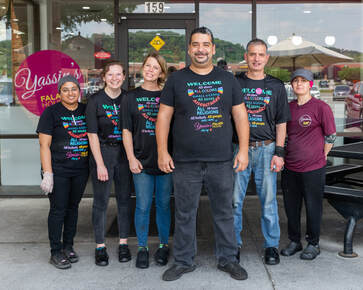 He also liked the climate and being near the University of Tennessee. After applying for asylum in 2012, he learned he could apply for a green card since his wife, a Palestinian who had come to Knoxville 17 years prior to Yassin, was an American citizen.
When a friend offered use of the Walnut Street building in 2014, Yassin took his love for downtown Knoxville and opened Yassin’s Falafel House, a Mediterranean restaurant. With just two plastic tables, it was a humble start. He made about 20 sandwiches a day, which he actually had to do at a different restaurant due to lack of kitchen equipment. However, in time, the people of Knoxville wanted more of his locally-famous falafel, and he was able to buy equipment and add more dishes to his menu, like shawarma and gyros. Now his team makes 20 sandwiches an hour and most recently, he has added plant-based meat choices to the menu. He says the business grew due to the help of his current business partner, and the Knoxville community in general.
Yassin opened his business because he wanted to share “good food and good love” with those of his new home city. He also wanted to build relationships. While the business’s start was a challenge, and he always knew his business would be a big part of his life, he never expected it to grow to what it has become today. He never expected all the love and support that has come from the people of Knoxville. Yassin’s future business plans include opening 2 or 3 more restaurants in Knoxville before potentially branching out to surrounding areas like Maryville and Oak Ridge.