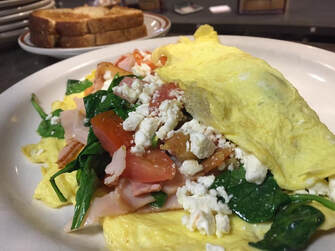 Sami's Café is open Monday-Saturday for breakfast and lunch.
They lived there until 1973, when they moved to Knoxville. A friend of Bassam’s dad who lived in Knoxville told them they should come to Knoxville for business opportunities, so after scouting the area, they bought a business: the Copper Kettle restaurant on Western Avenue.
Sam opened his own restaurant in 1993 in downtown Knoxville. But when he suffered a heart attack, and his doctor advised him to take some time off to rest and recover, he sold his business and took 14 months off from work. Regaining strength, he then went to work helping out at his brother’s business, Pete’s Restaurant, on Union Avenue.
Then one day, Sam’s current landlord reached out to him, knowing his background, and told him about an available restaurant location. Sam was unsure whether he wanted to get back into the restaurant business, but he had missed his customers from the downtown restaurant. So he decided to give it one more try. Sami’s Cafe, located in Franklin Square at 9700 Kingston Pike, was an immediate success. His home cooking quickly drew a crowd.
Named after Bassam’s father, the restaurant is open Monday - Saturday, 7:00 a.m. to 2:00 p.m. Originally, it was also open Friday nights and Saturday nights, but that didn’t last long as Bassam decided he wanted to spend more time at home with his wife and 9-year-old daughter. Sam says his family played a big role in helping get his business started. And as far as specialty entrees go, Sam says everything is his best seller - and that’s why he keeps it on the menu!